Michael reminded us this Sunday that the story of the prodigal son in Luke 15 is actually the story of two sons. Two very different sons who needed the very same grace. They were both consumed with self, as Michael pointed out. The younger with self-discovery, the older with self-salvation.

Michael spent the majority of the message on the older, less talked about son, and how resentment actually kept him from sharing in the heart of the father and the joy of the celebration.

What we don’t often talk about when we discuss this story is how the father had, in essence, lost both sons. One took his inheritance (which the father was under no obligation to give him, by the way, but gave him anyway…) and physically left. The other stayed, but relied upon his own obedience and righteousness, and served from a place of obligation rather than love.

And yet… the heart of the father runs after both sons. He breaks all cultural standards by literally running out to embrace his unclean, broken younger son; and again when he leaves his own party to go out and plead with his angry, entitled older son to come join the celebration. He chooses to go against the acceptable standards of his time and culture in order to display the wild, ridiculousness of grace and the extravagant love of a father toward all of his kids.

Michael said, “We can identify with both brothers at certain points, but we can develop the heart of the father“. I think for many of us, we come to Jesus understanding our own “prodigalness”. We come hoping to be accepted-at least accepted enough to be saved-but what we receive is more than simply acceptance-it’s exactly what the younger brother received: sonship. We find ourselves welcomed into the family, as honored, beloved sons and daughters. Sometimes, we are met with the cold shoulder of older brothers among us. And sometimes, once we’re part of the family, we become the older brother. We can become defenders of fairness and righteousness, forgetting that it was the perfect justice–the setting-things-right heart–of our Father, not our own righteousness, that saved us in the first place. We grab onto self-righteousness and forget the extravagant grace that drew us into our Father’s arms. We begin to scream for fairness, forgetting that the grace that bought our salvation was anything but fair. That it was the ultimate unfairness that our perfect, sinless Jesus was murdered so that his murderers could have life.

Once we’ve been given sonship, once extravagant grace has drawn us into the family, we no longer have to identify with either brother. Once we’re part of the family, the Father invites us to help Him host the party. To become vessels that carry the same love and grace we’ve received to the lost ones around us and among us. Our identity no longer has to come from which brother we most see ourselves in-it can now be rooted in the Father Himself.

So we get to choose. We get to choose how we respond to the beautiful unfairness of God’s grace. We can choose to celebrate, to enter into Kingdom-minded, grateful, humble service-in the way of Jesus. Or, we can choose to hoard what we’ve received, to buy the deception that we’ve somehow earned our “place”. That we’re somehow entitled to grace. The decision we make matters more than we know. What are we modeling to those who feel unworthy of sonship? To those who have wasted time and money on wild, sinful living? To those who have been deceived by the lie that they can be good enough on their own and have no need for grace? The Father’s heart runs after ALL of His lost sons and daughters. Will we?

Laura wrote, we get to choose how we respond to the beautiful unfairness of God’s grace.

I think we all want to respond well, but it doesn’t take too much scrolling through comments on social media or news articles to realize that as a corporate society, we have real problems with grace, and a good bit of that comes from the Christian community.

I love that Michael pointed out that the biblical heading “The Prodigal Son” was a manmade construct. Jesus doesn’t use the word prodigal in the parable, and like Laura pointed out, Jesus begins the story by saying in Luke 15:11 “There was a man who had two sons…”  Going back to the beginning of chapter 15, we see that Jesus is speaking to tax collectors and sinners who were gathering around to hear him, but the Pharisees and the teachers of the law muttered, “This man welcomes sinners and eats with them.” (v2) It is in response to their muttering that Jesus begins to tell the stories of the lost sheep, the lost coin, and the two sons.

I have been both sons. I was the child who wandered far away, made self-destructive choices, knew that I deserved absolutely nothing, came crawling back to Jesus and he offered me his unfair grace. Where would I be without it! I’m so grateful!

However, knowing that I didn’t deserve that grace, I became performance driven. I was trying to make up for all the years that I’d messed up; therefore,  I wanted to be the perfect Christian.  Things got out of whack on the other end of the spectrum. I was doing a lot of comparing and was judging myself quite harshly. I couldn’t live up to my own standards, was upset with others who couldn’t live up to my standards, and I was pretty darn miserable.

God met me there as well. I was doing a Bible study called “Experiencing God” by Henry Blackaby, and came to a point in that study where God revealed to me that I had set up my entire relationship with Him on a barter system. “God, I’ll do such and such for you if you’ll guarantee me some things…”. Some of those things  were not dying while my children were young (like my mom did), not getting cancer, always having John to take care of me, that nothing bad would happen to my kids, financial security, and the like. God was very gentle, but very direct and said to me, “Suffering is part of living in a fallen world, but I am with you, I will always be with you, and I love you. You have to surrender and trust me if you’re not going to stay stuck.”

Can I just say, ugh!!  I knew He was right, and I didn’t like it. Michael said in his sermon that the older brother tried to control the father through his obedience and righteousness. That’s exactly what I was trying to do. I was trying to control God. I wouldn’t have worded it that way, but that was it exactly.  I wish I could tell you that I surrendered in that moment, but it took about ten days of wrestling, not sleeping, not eating, and not wanting to do life God’s way with no guarantees other than He loves me, and He is with me. I really wanted Him to do it my way, but was finally exhausted and gave in. And when I gave in, the peace that flooded my life and the joy were indescribable. The burden of obligation was lifted and my relationship with Him has been real, and relevant, and growing, and powerful since that time. Some life crushing events have happened since that Bible study 25 years ago, and He has shown me over and over that He is God and He is enough.

Like the older son, I learned that obedience out of obligation and moral conformity leads to resentment. I feel like that’s where a lot of society lands right now, and resentment makes us mean.  So while we’re refusing to join the celebration, the Father comes to us and says, “will you surrender wanting to do this your way?”  He invites us to the feast.

When we live in the mindset of the older brother, our relationship with the Father becomes about us. He says to his father in verse 29…”all these years I’ve been slaving for you and never disobeyed your orders. Yet you never gave me even a young goat so I could celebrate with my friends!” The emphasis is all on himself, what he thinks he deserves, what he thinks he’s entitled to,  and what he thinks his brother is not entitled to.

And the father gently reminds him that he has always been with him, that everything he owns is shared with his son, and then says, “But we had to celebrate and be glad, because this brother of yours was dead and is alive again, he was lost and is found.” (31)

Both sons have lived on the thief side of John 10:10. The youngest son has returned and is experiencing the Jesus side of that verse.  And the Father has demonstrated Luke 19:10 to both sons. He ran to the youngest, and has gone out to the oldest.

He is offering his oldest son grace. Grace to come in, to participate in the celebration, to be part of the rejoicing in heaven because a sinner has repented and come home.  He is offering his oldest the chance to also repent and come home. Jesus leaves us hanging at the end of the story. We don’t know what the oldest son decides. The Pharisees and teachers of the law have heard the story with their ears. Have they heard it with their hearts? Have we?

The Father stands in the middle between both sides, the broken, fallen, destitute son, and the self-righteous son and says “come”.  May we surrender to the work of the Holy Spirit in our lives as He works to develop  the heart of the Father in us, so that we can set aside “fair” and fully embrace the world with His unfair grace and love. 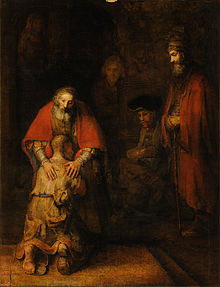 One thought on “What About Me?”